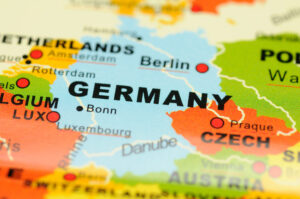 More often than you might think, we encounter a customer at Full Blown Coatings who comes across powder coated wheels for the first time and asks “Did these just come out?” You can imagine the surprise on his face when we tell him that powder coating has been around for a long time–over 60 years in fact.

Yes, powder coating has been used since World War II having been developed in Europe in response to pressure to improve the environment.  A German scientist named Dr. Erwin Gemmer developed the fluidized bed application for thermoplastic resins on metal creating a more efficient alternative to flame spraying. He applied for patents for this new process in Germany in 1953. That patent was issued two years later.

Since its beginning across the Atlantic, powder coatings have become increasingly popular in all parts of the world including the United States. This process was introduced to the U.S. shortly after Dr. Gemmer’s patent was granted.

But it would take another 25 to 30 years before powder coating would begin to grow rapidly in industrial countries like the United States, Japan, and China. Innovation has been the key to driving that continuous growth in this industry since the early 1980’s. Advancements made in improving its formulation and improvements in application technology have paved the way for powder coating to make its mark in today’s industrialized world.

With an increasing variety of uses available, powder coatings are being used more and more to replace liquid finishing as coating and application technology advance.

While many people are still new to this treatment for your car’s wheels, as an example, powder coating has been around for over six decades and it’s certainly here to stay. In fact, the Powder Coating Institute (PCI) reports that this process presently represents over 15% of the total industrial finishing market right now and predicts constant growth in this technology for decades to come.

Powder coating produces superior finishes practically and economically. No wonder that it is the fastest growing finishing concept being used today.

Whether you’ve purchased wheels or something else with powder coating before, or you’re new to this application, don’t hesitate to consult with one of our representatives and find out how powder coating can be an effective, stylish, and environmentally sound solution for your next project.

Spend More Time on Your Porch This Spring